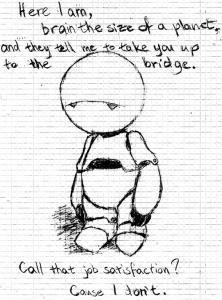 According to Douglas Adams, the idea for The Hitchhiker’s Guide to the Galaxy occurred to him when he was lying drunk in a field in Innsbruck in 1971,  gazing at the stars, carrying a copy of The Hitchhiker’s Guide to Europe. His idea spawned a radio series, a very inaccurately named trilogy of five novels, a TV-series on BBC 2, and a Hollywood movie, among other things. If you haven’t yet read the books, do so! It’s well worth your time, as opposed to the recent film.

When we opened a new hostel in Berlin in 2003 , we called it “Heart of Gold” – inspired by the name of the first starship to be equipped with the Infinite Improbability Drive. Many design ideas for the hostel are inspired by the books and parts of the TV-series.

Beneath it lay uncovered a  huge  starship,  one  hundred  and  fiftymetres long, shaped  like  a  sleek  running  shoe,  perfectly  white  and mindboggingly beautiful. At the heart of it, unseen, lay a small gold  box which carried within it the most brain-wretching device ever conceived,  a device which made this starship unique in the history  of  the  galaxy,  a device after which the ship had been named – The Heart of Gold.

“Wow”, said Zaphod Beeblebrox to the Heart of Gold. There wasn”t much else he could say.    He said it again because he knew it would annoy the press.     “Wow.”

They”ve built the Improbability Drive! Arthur, this is… Arthur? What”s happening?” Arthur had jammed himself against the door to the cubicle, trying to hold it closed, but it was ill fitting. Tiny furry little hands were squeezing themselves through the cracks, their fingers were inkstained; tiny voices chattered insanely.  Arthur looked up.  “Ford!” he said, “there”s an infinite number of monkeys outside who want to talk to us about this script for Hamlet they”ve worked out.”

The Infinite Improbability Drive is a wonderful new method of crossing vast interstellar distances in a mere nothingth of a second, without all that tedious mucking about in hyperspace. It was discovered by a lucky chance, and then developed into a governable form of propulsion by the Galactic Government”s research team on Damogran. This, briefly, is the story of its discovery. The principle of generating small amounts of finite improbability by simply hooking the logic circuits of a Bambleweeny 57 SubMeson Brain to an atomic vector plotter suspended in a strong Brownian Motion producer (say a nice hot cup of tea) were of course well understood – and such generators were often used to break the ice at parties by making all the molecules in the hostess”s undergarments leap simultaneously one foot to the left, in accordance with the Theory of Indeterminacy. Many respectable physicists said that they weren”t going to stand for this – partly because it was a debasement of science, but mostly because they didn”t get invited to those sort of parties.

from: “The Hitchhikers Guide to the Galaxy” by D. Adams.