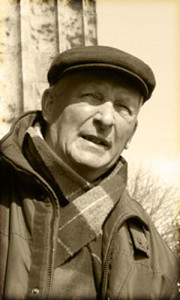 For many years now, the Heart of Gold Hostel has been a pick-up point for the walking tours offered by Brewer’s Berlin. They are the longest-running independent walking tour company in the city, and their guides are the best around.

Brewer’s is named after Terry Brewer, an Englishman who first visited Berlin in the 1950s and returned the following decade as a member of the British diplomatic service. He started his career as a tour guide during the Cold War, regularly crossing the Wall with Allied personnel to show them East Berlin. Brewer’s Berlin was born after reunification, and though he hired some very good people as guides, the daily “Trips with Terry” were the company’s calling card.

Health problems forced Terry to call it quits last year, and he returned to England. Now we have received the very sad news that Terry has passed away.

Terry was an incredibly sweet man, as well as an extremely knowledgeable one with a fascinating, unique perspective on the city and its history. He would brighten our day every morning when he came in to the hostel to corral people for his tour. We will miss his ruddy face and ebullient nature, as well as his impromptu lessons on random subjects such as the old British currency system. Our thoughts are with his family and our friends at Brewer’s Berlin.